Did you know that UCR played a major role in the production of seedless tangerines that Cuties source from? Sharilyn Hunke is so proud of that fact that she often informs her friends of this — even sometimes to those who were student lab technicians on the original project.

“I always loved UCR, firmly believe in what we do, and am so proud of how it has grown.”

If there’s anything you’d take away from a conversation with Hunke, it would be that she’s a thinker and a people person. Her path to becoming Associate Director of Auxiliary Marketing for UCR was an unconventional one. She was a philosophy graduate, an Air Force wife and a stay-at-home mother, but after hopping around for a few years with her family, she was looking to get back to work.

Growing up in a creative home, she also picked up the ability to write and before she knew it, she was managing the marketing department for UCR’s Riverside Campus Federal Credit Union, (now known as School’s First Federal Credit Union). After a few months, she decided to earn her certificate in Marketing Management from UCR University Extension, taking one class a quarter.

After 12 years at the Riverside Campus, Hunke moved on to nonprofit work, volunteering in child abuse prevention and driving community engagement. She was a major proponent of #GivingTuesday and worked with Children’s Fund to raise millions in donations to aid at-risk children with the resources they need.

But over the years, Hunke has stayed in touch with UCR. She was on scholarship committees and acted as a board member of several other associations.

“Being here now and getting to be a part of UCR, not just as an admirer, is super special for me,” she says. “A nice way to bookend my career.”

But along the way, there were unexpected speedbumps. She ran into challenges adjusting to marketing trends that shifted as soon as she got used to them. After receiving her certificate in Marketing Management in 1999, and over the course of her two-decade career, marketing has been a constantly evolving field.

“When I first started, we barely had the internet,” Hunke continues. “Social media did not exist. Now, social media is a big part of marketing. So, if you’re open to change, marketing will be a good field for you. Once your audience becomes familiar with something and they see it over and over, they get bored. They’re looking for something new.”

As her career has continued, she has made plenty of connections. She refers to networking as one of the major joys of her job, both as a way to make friends and also as an obligation to give back to up-and-comers as they launch their own careers. In fact, her son, Riley, is currently a mathematics major at the university. 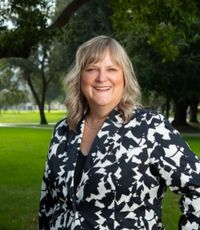