Not quite 30 but watch out, world!

Sahara Powell likes to take things as they come. At the same time, this highly energetic and ambitious, self-described Millennial/Gen-Z “cusper,” never stops striving to make whatever’s going to happen next . . . happen. 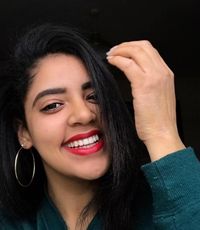 “I’ve always liked to live a life of saying ‘yes’ to different opportunities, so I’m trying not to shy away from different things that come up,” she said via Zoom from the downtown Los Angeles apartment she shares with her boyfriend. “I like to stay busy. I like to have my hands in different areas, and really diversify my income and whatever I’m doing at the time.”

It’s that spirit that has enabled Sahara to earn her Master’s degree, author a widely read blog, establish a professional career in marketing, do freelance work in copywriting and photography, manage social media accounts and mentor other would-be entrepreneurs, serve as an Aerie Changemaker, and collaborate on a soon-to-be-published children’s book—all while still on the sweet side of thirty.

Her ever-evolving blog, Borderline Millennials, tells her story. “It’s for those teetering on the edge of being a Millennial and Gen-Z, because I was born in 1995, so I’m right at that weird point where I relate to a lot of Millennial stuff, but I also relate to Gen-Z,” she explained.

“It started as a lifestyle blog, and I would talk about navigating the transition from undergrad into the real world and dealing with anxiety and depression and different things, and then it evolved into traveling abroad and earning my Master’s and taking the big leap in moving to Los Angeles as a twenty-something and starting my career. It follows me and everyone in my generation and what we’re going through in this moment,” explained Sahara. 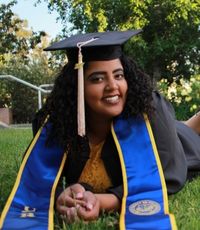 Growing up in Sacramento, Sahara wanted to attend college in Southern California. While she flirted with attending Loyola Marymount University, in Los Angeles, her childhood street name had always drawn her to Highlander country. And when she first set foot on the UCR campus, everything just clicked into place. “I’ve always kind of had UCR on my radar,” she said. “I grew up on Riverside Drive, and I always thought it would be funny to end up in Riverside. UCR instantly felt like home to me.”

During her senior year at UCR in 2017, en route to earning her Bachelor’s degree in Business Administration, one of Sahara’s classes received a visit from a UCR University Extension representative, who explained all about the Postgraduate Diploma and Master’s Pathway programs. Not only was Sahara all ears, she responded with an emphatic “Yes!” 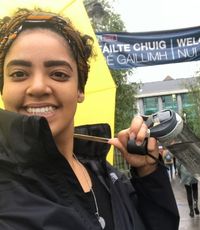 After completing her first three quarters and earning a Postgraduate Diploma in Marketing at UCR University Extension, Sahara took advantage of the Master’s Pathways opportunity to earn her MSc in Marketing Management from the National University of Ireland Galway. Originally eyeing the MSc program in International Business at the University of Hertfordshire, in England, Sahara decided to focus on marketing. That decision brought her to Ireland, and eventually to excellent professional opportunities back in California.

“Sahara took advantage of the Master’s Pathway opportunity to earn her MSc from the National University of Ireland Galway.”

“That was probably one of my best decisions ever,” she said. “It was really fun to go abroad to Ireland, a place that I never really had on my bucket list, but I went and I met so many incredible people. I got a whole new meaning of what diversity means. I grew up in Northern California, and then I went to Southern California, and I thought I kind of knew diversity at its finest; but to be able to go abroad and then have people in your cohort who were from Germany and India and Ireland and the US, I just got a whole new perspective on what diversity meant to me and to the world.”

The experience in Galway—perhaps the most diverse city in the country, with 20 percent of the population non-Irish and half of those recent immigrants from Africa and Asia—broadened Sahara’s worldview not only socially, but also in terms of business and marketing. Her courses, for example, did not focus solely on the usual American corporations and perspectives. One of her Master’s projects involved working with a local golf resort that was, among other things, trying to ramp up its appeal to foreign tourists.

“… I just got a whole new perspective on what diversity meant to me and to the world.” 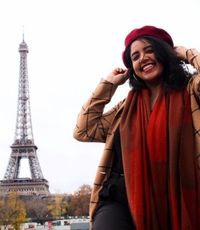 “Just getting to know how to market an international business and resort to other international clientele and other people was really interesting,” Sahara said. “I was already in a new foreign place, so I had the opportunity to learn more about the Irish culture but also how to market to those looking to come and explore the Irish culture, just as I was doing. I thought that was interesting because a lot of what I did in my undergrad was California based and very localized. To be able to think on a broader spectrum was really enticing to me.”

Back in the States, while finishing her Master’s with an Advanced Internship that saw her creating a marketing plan for an LA startup lifestyle brand called Branëu, Sahara also found her first marketing job, working for marketing firm Hennessy Digital.

In 2019, she was hired at Hollywood Burbank Airport as a Marketing Communications Associate. Then the pandemic struck. As usual, Sahara was ready to go with the flow and make the most of it. “It was a very tricky situation to navigate, working in marketing for an airline when you couldn’t promote travel for an entire year,” she recalled, “but it left me with a lot of learning experiences and having to get creative.”

“In 2019, the pandemic struck and Sahara was ready to go with the flow and make the most of it.”

Sahara’s creativity led her to borrow the Tyra Banks neologism from America’s Next Top Model “smize”—to smile with one’s eyes—for a Smize for the Skies campaign designed to encourage air passengers to continue to wear face coverings without sacrificing the positivity that comes from being able to smile at others.

At the end of May in 2021, she left the airport to pursue freelancing opportunities while getting to work on a passion project with two close friends from her UCR days—Ambika Rajyagor and Taylor Days—that is soon to become the children’s book Three Little Ghouls and the First Day of School. 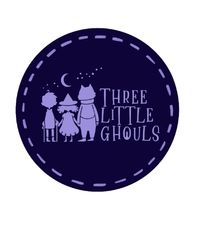 Currently being illustrated, with a Kickstarter campaign in the works to help defray publishing costs, the book teaches older elementary school children about positive affirmation and how to deal with first-day-of-school jitters. The “three little ghouls” are Lycaon Priam, a half-werewolf, half-yeti child who struggles with being much bigger than his classmates, based on some of Sahara’s own childhood experiences; Eli, modeled on Ambika’s younger sister, a vampire boy adopted by ghost parents who has to use crutches; and Luna, a Black witch who lives with her single mother and grandmother, inspired by Taylor’s upbringing. The overall project came about after watching the TV series, Lovecraft Country.

“Her book, co-authored with two friends, teaches older elementary school children about positive affirmation and how to deal with first-day-of-school jitters.”

“We were really inspired by being able to see people of color in a predominantly white genre of film and TV,” Sahara said. “We felt the need to make it a bigger thing and to be able to put more content out there that actually included people of color and people with different abilities and diverse characters, and we figured the best way to do so was to write a children’s book.”

Based on the project, the three women were named 2021 Aerie Changemakers, which got them featured on Aerie’s website, as well as in a Forbes article. 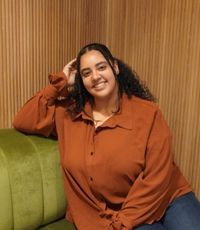 Now working as a marketing associate for Girl Scouts of Greater Los Angeles, Sahara, a Girl Scout all the way through high school, has returned to the organization that gave her a very first go at marketing. Yep, selling cookies. Coming full circle with them has been a very satisfying career development for Sahara.

“Now working as a marketing associate with the Girl Scouts, Sahara has come full circle—and it’s been so satisfying…”

But she is always on the go. A self-described extrovert, she is reenergized by human interaction. A day of rest and relaxation for her recently meant spending all day at Disneyland, for example, and she’s constantly accepting invitations through her blog for media and marketing opportunities at various events.

So where does she see herself, say, five years down the road? Great question. 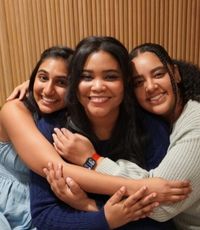 “I hope to be a complete published author and that Three Little Ghouls is on its third or fourth book in the series and children are loving it, and if it gets picked up by DreamWorks or Netflix to become an animated series, I’m definitely not going to say no,” she laughed. “That would be really awesome. But I can definitely still see myself working with Girl Scouts and rising in the ranks there, because it’s an organization that I love working with. I’ve always felt passionate about their mission and their vision. The future is uncertain for me because I just like to take advantage of what opportunities present themselves.”

One thing we know for sure? Sahara’s future won’t disappoint and it will be a journey that we all want to follow and be inspired by.