Have you ever met someone who is always on the go, has more degrees than you thought possible and is still hungry for more? That’s Leo Toyama in a nutshell. As the son of Japanese-Bolivian parents, he was born in Bolivia and grew up with a wealth of experience and knowledge of travel and exploration. He knew from a young age that hard work would get him where he wanted to be because that’s exactly what his parents did.

His parents moved from Okinawa during the war in 1945. They started with nothing, according to Toyama, and had to build themselves up from the ground level. The Toyama family adjusted to the city life of Bolivia and explored what it meant to live in a new country with an entirely different language. 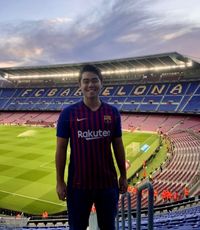 What this meant to Leo was a childhood of wonder, exploration and determination. In high school, he took part in a six-month exchange program in New Zealand to experience even more of the world. While still in high school, he was offered a college scholarship in soccer, but he turned it down to go to university in Barcelona and Murcia. While there, he earned a dual degree in leadership and business management in only three years — all during the COVID-19 pandemic.

He says that earning a degree in Spain opened his eyes to the challenges of learning in a different language. 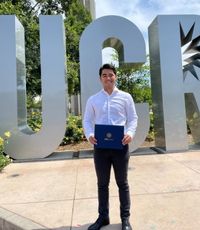 After a life of traveling to several different countries, he decided to spend his time in the Postgraduate Certificate and Diploma program at UCR University Extension as a part of the Business Management courses. The coursework gave him some flexibility in his learning schedule, while also offering him the chance to earn experience in his field. Then after receiving his postgraduate diploma, he seized the opportunity to participate in the Optional Practical Training (OPT). OPT allows students like Leo to apply their skills learned from courses to an actual on-the-job full-time salaried position.

He chose to learn and work in the U.S. at this point in his career because it’s “one of the biggest economies in the world,” says Toyama.

His job at Trade Capital Corporation, TCC for short, is different from his experiences internationally. Especially compared to Europe and Bolivia, where he says the work life is more easygoing, the U.S. is career and networking-focused.

TCC is a “Silicon Valley based startup.” As someone who has always been interested in a self-made company, the structure and co-working experience is exactly what he was looking for. TCC has been on his goals list for a while, he even would watch videos and read case studies they put out before he finally got the offer to work there. 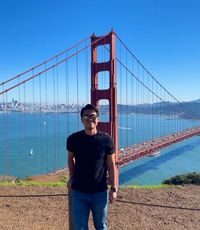 Even though the position is remote, he still moved to the Bay area because most of his coworkers reside in the area. They integrated him into the team and he says he feels lucky with this opportunity to be working with experienced professionals. Since getting started, he’s been offered a full-time position, which he accepted.

The top three skills he’s developed while taking courses at UCR University Extension that prepared him for the role he holds today include:

Leo says he’s happy he decided to go to UCR University Extension because it’s helped him to think more outside the box and find creative solutions to everyday problems.

What’s next for our boy wonder? He says he wants to “Continue the path of knowledge through work experience. If it’s not ‘here,’ then anywhere in the world — as long as I have the right leadership with me and working with me. I’m looking for great leadership and teams, and I want to spread knowledge to others.”