Time for a Tune-Up: “Learning How to Learn” is Your Key to Unlocking Future Success

Michael P. Toothman wants to future-proof you. As our rate of technological change has skyrocketed, the concept of future-proofing has continued to gain increased cultural currency. It’s popped up in internet tech forums, and wormed its way into dictionaries—the OED traces its first usage back to the mid-eighties. And, as I type this, Microsoft Word recognizes the verb form above, even as it underlines the noun form a line later. I recently stumbled across “future-proof” as an adjective in an online smartphone review. So, what does a smartphone have to do with you? Well, if you think your current phone is still going to be knocking your Crocs off five years down the road, you’re either extremely naïve, overly hopeful, or you broke the bank to buy the latest model. As humans, of course, we can’t trade ourselves up for the latest version, but we can update our personal software; we can reprogram our operating systems. 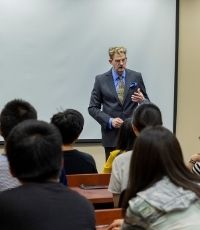 That is why Michael, a UCR University Extension Instructor and recipient of the 2018 UPCEA West Region Excellence in Teaching Award, calls “learning how to learn” the number one future-proof skill. “Because if you’re going to prosper, you’re going to have to learn, unlearn, and relearn new things constantly,” he says, listing other key future-proof skills as critical-thinking and problem-solving, financial literacy, and persuasive speaking and writing. “These are skills that stand the test of time.”

As a working professional in the field, he once managed in-flight entertainment systems for business jet passengers, both commercial and private. So yes, he knows his stuff, and he has stood the test of time. He’s done this with an end goal of helping others do likewise. And he’s done it not necessarily by being able to read the tea leaves, but by knowing that either way, sooner or later, you’re going to have to brew a fresh cup.

“What happens is we have a lot of people in the workforce right now who are irrelevant education-wise . . . basically obsolete: human obsolescence,” Michael says. “This is a very dangerous thing because technology changes every Monday morning when the board of directors meets—it’s not stopping to wait. When I established this concept of future-proof humans, the idea was to make sure we are teaching students future-proof skills; those skills that no matter how technology evolves, they’re still going to be relevant.”

“The half-life of people’s skills is a lot shorter than you think,” he continues. “You used to make really good money in America being a FAX machine repairman or a copier guy. Those were really high-paying jobs at one time. Airlines, rather than fly around with all this heavy equipment for entertainment, they just flicked on the Wi-Fi and said, ‘Bring your phone.’ I’m here to tell you it’s no longer the golden age of in-flight entertainment.”

“Michael has trained and mentored more than 5,000 project managers…”

It is, though, the golden age of continuing education, with more and more options that are practical, convenient, affordable, and can build on prior knowledge to prepare professional learners for whatever lurks around the corner. “This is a movement; this is the direction we’re going. This is the value of education now. This is the new look at higher ed.,” Michael says. “We’re not just teaching some skills that are going to be obsolete next Saturday. We’re teaching you how to have future-proof, evergreen kinds of skills that you can apply to any endeavor.”

One of the advantages for students continuing their education at UCR University Extension with Michael is access to the self-empowering mentorship he gives both during and after his classes, including in a private Facebook group he administers called, what else, “FutureProof Humans.” In the group, he shares inspirational quotes, articles on professional development and technological change, and links to educational opportunities across a variety of online platforms.

Group members are encouraged to post as well, and those posts include testimonials about his teaching, from former and current students, like this one from Tom Hennie: “I credit Michael P. Toothman with helping me kick my career into high gear. His teaching and mentoring have had a profound, positive effect on me and how I deal with and lead people. His humor and practical experience are invaluable in creating a leadership mentality.”

It’s an effect Michael has on a lot of people. Five minutes after I got off the phone with him, I was online looking over my admittedly pathetic LinkedIn page. Why? Because Michael, who admits to being on every social media platform there is, says that while Facebook is great for chatting with grandma, for professional purposes, LinkedIn is where the action is.

“We’re teaching you how to have future-proof, evergreen kinds of skills…”

He even occasionally provides LinkedIn makeovers for students, one of whom parleyed Michael’s social media mentorship into a job as a Brand Ambassador for corporate giant Samsung. “That’s how you get a job anymore,” he insists. “It isn’t Monster.com. So, if you have a good platform, you have a lot of opportunities.”

Frederick Do and Jayme Adamson are two former students who didn’t need to go the LinkedIn route. They used UCR University Extension’s Project Management professional certificates to gain promotions at their present workplaces.

Fred had worked in UCR University Extension’s Technology Solutions (IT) Department for four years when he earned his Project Management professional certificate, taking his introductory and closing classes with Michael. He’s now Director of the department, fully embracing Michael’s creed through application of his project management skills.

Jayme has been a project manager with Kaiser Permanente for the last 12 years. Two years ago, professional certificate in hand, she earned a promotion to Regional Director. She credits the UCR University Extension program generally, and Michael specifically, for her career advancement, writing on the FutureProof Humans Facebook page, “You are a big part of where I am today! I now lead a team of six project managers. I would not be in this position if not for your teaching and guidance.”

“…LinkedIn is where the action is.”

At 62, having reached the top of her profession, Jayme has embraced the lifelong learning mindset integral to the future-proof concept and plans to enroll in UCR University Extension’s Professional Certificate in Agile Project Management later this year.

This is what you get from Michael. It’s not just the course material, whether online or in-person, it’s also the inspiration and life-coaching. “I’m the Sherpa,” he says. “I’m not the professor, I’m not the sage on the stage, I’m your trusty spirit animal. I’m your guide.”

Lubov Petrova took Project Management Essentials last summer with Michael, followed by Project Leadership, Communication, and then Team Building and Introduction to Agile Project Management in the fall—all remotely. She credits his in-class dynamism and office-hours accessibility with effecting a profound transformation in her.

“It was enough to change my perception of life,” she says, “to find what I believe in and what really gets me out of bed every morning. I was lucky to become a student of Michael’s. I recommend that you immerse yourself in it. It will take you into a world you didn’t even know existed. His radiant energy and brilliant coaching skills will help you understand yourself, your feelings, and their origins.”